Here at Football Cool Corner we love a bright football kit. after all nobody wants to play in a dull football strip! Just look at Manchester United’s famously boring, grey third kit from 1996 that Alex Ferguson had changed at half time against Southampton

For a couple of seasons in the early 1990’s many clubs chose strips that had very loud colours and sported bizarre geometric patterns and flashy artistic designs incorporating strange smudges and flecks. These decorative shirts were all the rage in Britain, let us know your favourites from the rest of the footballing world!

Our personal favourite is the “Jackson Pollock” Dundee United away shirt from 1993. 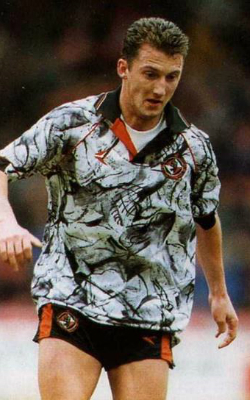 Carrying on the paint brush theme, the Peterborough United away kit from 1993 seems to involve a great deal of paint colour testing on a red background! 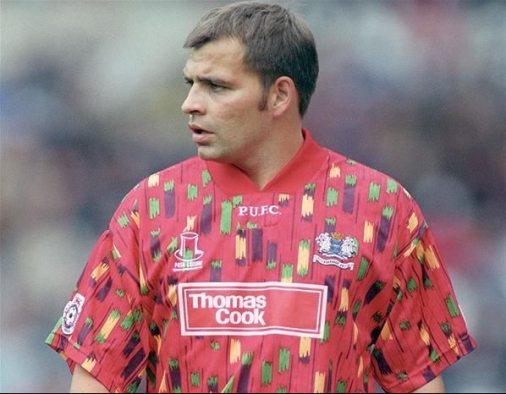 The Huddersfield Town away shirt from 1991-1992 was very on-trend for the early nineties with its red and black tie-dye.

It wasn’t just away kits which featured experimental designs, check out the classic Norwich City shirt form 1992-1994. This shirt divided fan’s opinion but one thing’s for sure it coincided with a marvellous run of results, from finishing third in the Premier League to then beating Bayern Munich in the UEFA cup! Or maybe it wasn’t a coincidence, maybe it was their glorious shirts!

One shirt that didn’t divide fans was the Wolverhampton Wanders home kit from 1992-1993, it was universally despised by everyone! It featured what can only be described as “skid marks” courtesy of their tyre manufacturer sponsor.

Another unpopular shirt was the Hull City “classic” tiger print top from 1992. It took their club nickname (the Tigers, unsurprisingly) and created a fashion statement which the Humberside city just wasn’t ready for…and probably never will be…

The Port vale shirt from 1991 has a similar animal print look about it, fortunately they didn’t go the full zebra! 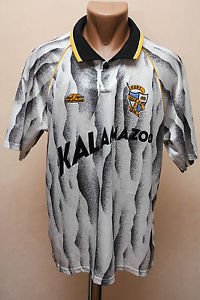 Coventry City completed the brash home and away shirt double in 1992-1993 with these patterned efforts. 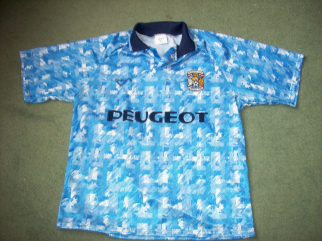 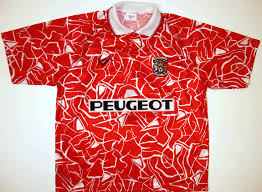 The same manufacturer created this beauty for Burnley in the same season.

If you like complex geometry and complementary colours, you’ll appreciate this Shrewsbury Town shirt from 1993. It probably won’t look too good worn with jeans down the pub though!

Finally, we’ll leave you with Dunfermline Athletic’s 1992 shirt, we really think it must have been designed to give an advantage to Dunfermline players by dazzling the opposing side!

As we say every month, if you want to be cool, you need some crest on your kit because a kit without a crest , it’s like a hotdog without saussage…it doesn’t have any sense…

This month you need:

1. Leicester City Football Club’s one. To be as sneaky as a fox, like Riyad Mahrez…

3.Manchester City’s one.  to navigate on the stream…

5.And the last one: Chamois Niortais FC, because with this kind of animal in the cage, nobody scores…

Football badges are essential to every respectable football player. Because a kit without a crest, it’s sad like a sky without sun, worse than a beer without foam or a coke without bubbles. The badges have travelled through the years carrying with them the club history.  It vouches for the soul of the team. If you sew the crest on your kit, you’re stronger…if you don’t have it, you loose your super powers…

This month, to be cool, you need :

1.Crystal Palace’s one, if you want to grab the ball like an eagle,

2.Red Star FC’s one protect you like Captain America’s shield

3.With the one of Russia national team, you will be as great and as handsome as Aleksandr Kerzhakov 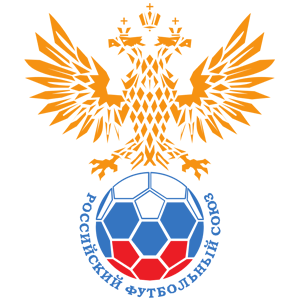 4.With the one from Uruguay, you will lead the game like Enzo Francescoli,

5.With the one of the Romanian national team, you will have the power of Gheorghe Hagi aka « the Maradona of the Carpathians »

6.And the greatest, CSKA Moscow’s, which will make you as strong as the Red Army

Wich one is your favourite? Let us know! 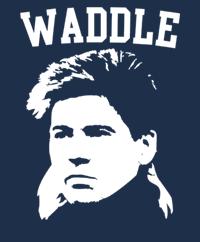 This Article is the first in a series about the coolest players of all time. And the coolest for us, is Chris “Magic” Waddle.

Chris Waddle, for those of you who don’t know him, was Olympique de Marseille’s biggest star of the early 90’s.

I won’t rewrite his wikipedia page, but I have to give you a few figures first, 62 selections for the England team and 27 impressives goals for Marseille between 1989 and 1992. Bernard Tapie bought him from Spurs for a record amount at the time of £4.5 million which made him the 3rd biggest transfer of all time (behind Maradona and Ruud Gullit).

His start in Marseille was not great , particularly because he was not physically ready. He was suffering from the Mediterranean heat and everybody thought the club had made a mistake recruiting him. Eric Di Meco said on the radio in 2016 that “When Waddle arrived in Marseille, we were wondering if he really was a football player (…) he wasn’t physically prepared”.

It was after 2 months of being trained by  Gérard Gili that he really revealed his true self. And Before the end of 1989, Waddlemania began… for 3 reasons:

In Marseille, it was madness…He was chased in the street like a rock star and all my 4th grade class got the famous Waddle « mullet » haircut (in french: « la coupe à la Waddle ») . And when I say all of the class I’m not exagerating… even the girls! This hairstyle’s success depended on the parents, their financial means and the kid’s type of hair. Some of them looked like a hedgehog from the front and Tina Tuner from the back; some unfortunate others, the curly haired ones, looked like sheep with their sides sheared and with straight, bowl-cut fringes. But kids were happy, they played football at school breaktimes yelling “anaouaneagain” pretending they could speak english, this is what everybody should remember from this period 😉 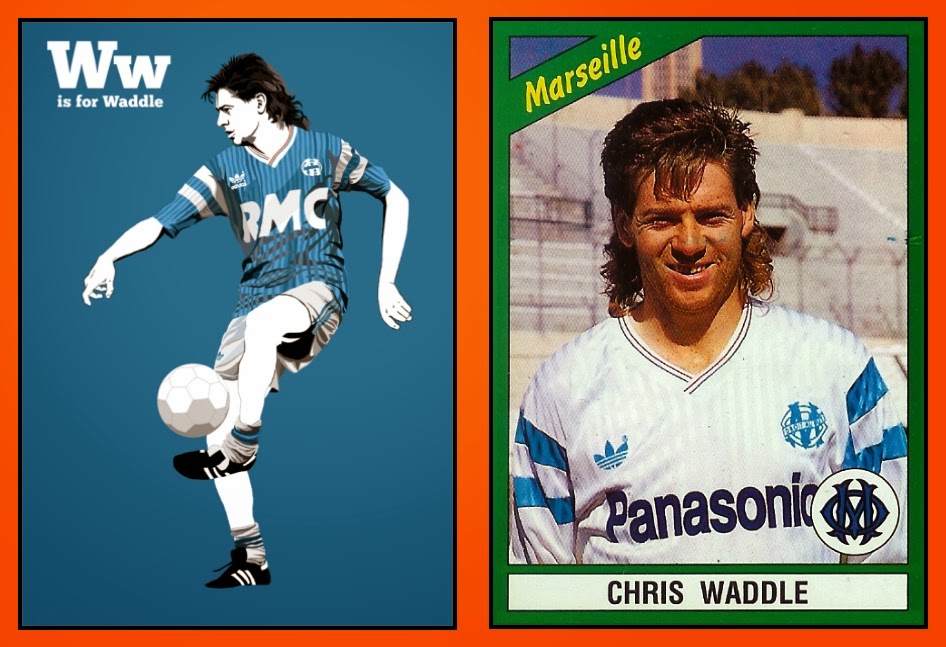 No words are needed to explain why his game was brilliant and why the trio of Waddle/Papin/Francescoli is regarded as one of the best attacks in Europe of all time, just watch this short 3 mins video:

For the cool attitude part, I will give you 2 particular examples of behaviour.

First of all, he invented the « swim on the pitch » 🙂 (now players are salting steaks… could we please bring back the classics… ).

Secondly, if he was not happy with himself, he was miming the donkey (you can see it in the movie above). Well, the guy never took himself serously, always smiling, he was and always will be acclaimed in all of the french stadiums, even by the Paris fans who are Marseille’s worst ennemies…

The most cult moment is the goal he scored against AC Milan in the semi final of the European Cup in 1991, which gave victory to his team. Words can’t do it justice so here is the video:

Most extraordinary of all is that he can’t remember the goal at all! Taking two knocks on the head whilst challenging for balls with Milan players, he went to hospital with concussion later in the night…  after ten days recovery, he arrived back on the pitch  considered by Marseille fans  a war hero!!

Of course, all good things come to an end and he left Marseille after 3 seasons. I listen to him now on the BBC with great pleasure where he comments on Premier League and FA Cup games.

Chris Waddle is definitively a great example of success (he was working in a saussages and meat pie factory when he was 16 ) with humility. He is, after all, the Coolest of the Cool…

We’ve been going through the web just in case you would like to adopt a style « à la Waddle »:

For the ones of you who collect pin badges or Panini images, click here or here if you want to buy a signed kit.

If you want to learn more about our friend Chris or if you are nostalgic for this time, we recommend this documentary, quite long but so good…

Here it is then friends, if you too have, like me, a passion for Chris Waddle or if you have had  » la coupe à la Waddle « , or if you want to suggest anything to me, please leave a comment.

(ps: sometimes I’m glad, and my hair too, that Valderama didn’t turn up to play in Marseille when I was in 4th grade) 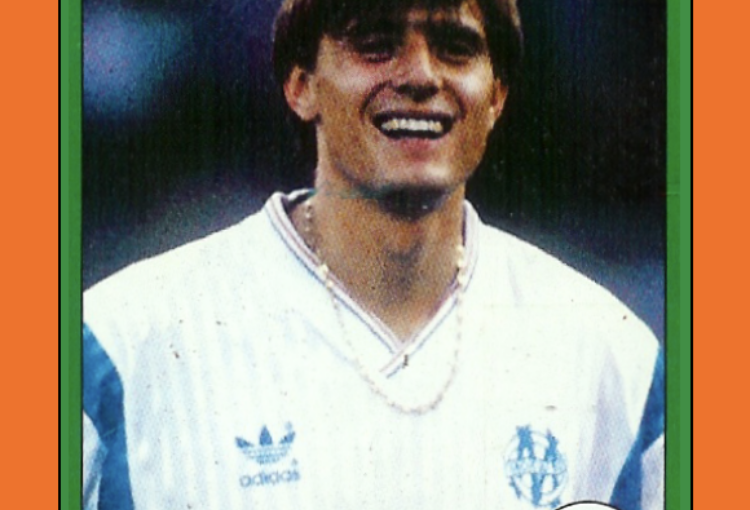 Welcome everybody to this brand new blog for all football lovers, better if you’re cool…If you are not, don’t worry, you are still welcome… we will help you to improve 😉

Here we prefer Olympique de Marseille, Sporting Club de Bastia and Kidderminster Harriers. That’s it! we said it! We have spit it out! We will try very hard not to mention it again, in order not to bother you and to be fair and neutral :)))

But also here we love Football, with a capital F, from beginners to professionals, from conference league to premier league, from Dynamo Kiev to FC Dijon, from Liga Sagres to Bundesligua, from World Cup to Woman’s Asian Cup (where Bahrein won 6-0 against Jordania yesterday by the way).

Here we love the beautiful game and fairplay.

So what we hope to acheive with this blog, is sharing with you our passion and the football way of life.

English is not my mother tongue, I hope I will not make too much mistake…

Com’on guys ! Ball on the spot, kick off, the game begins!!  Subscribe!!!! Have a cool football attitude!